Steel is one of society's most important materials. But it is also an environmental problem that accounts for seven percent of the world's carbon dioxide emissions. Swedish researchers are now working on a sustainable solution how to produce steel without carbon.

Steel is everywhere in our everyday lives - in cars, bicycles, railways, bridges, machines, sinks, computers. A lot of the steel around us is recycled. But the scrap that is recycled is not enough for the world's steel needs. Therefore, we need to produce new. 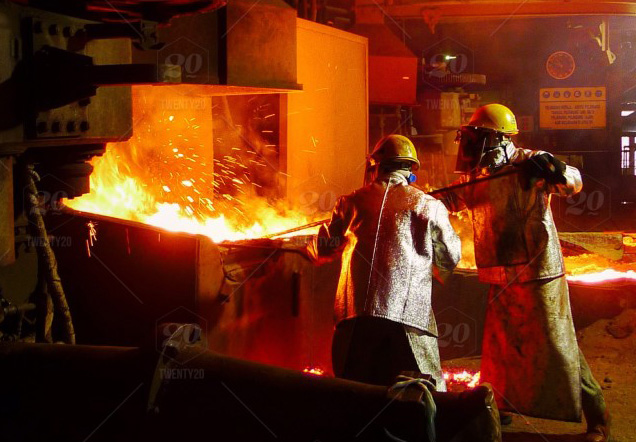 To cope with the new production, Sweden must import coal from, for example, Australia. New steel is made from iron ore that is mined in mines. The steel is created by removing the oxygen from the iron ore, which consists of iron oxide. This is done today with the help of carbon, which binds up the oxygen in the iron oxide.

It is thus the coal used in production that is environmentally friendly.

The steel giant SSAB produces almost nine million tonnes of steel per year. SSAB has realized the problem and wants to find a solution to create steel without carbon. This is done within the framework of the so-called HYBRIT initiative, which is a collaboration between SSAB, LKAB and Vattenfall.

- The HYBRIT initiative is about replacing coal with hydrogen - which means we get rid of the dependence on the coal and can stop importing coal from Australia. Instead, we use locally produced electricity and hydrogen and produce steel of the same quality, says Martin Pei, technical manager at SSAB and chairman of the HYBRIT initiative. Maybe we can even get better quality steel than we have today.

Right now, work is underway to develop the new hydrogen technology in a large pilot plant for sustainable steel production in the mine. You start on a small scale by producing about one ton of steel per hour. The goal is to scale up to a production of hundreds of tonnes per hour.

However, producing steel without coal requires a lot of new technical solutions. Another challenge of replacing coal with hydrogen is that it requires large amounts of electricity because hydrogen is produced by splitting water. Here, however, Sweden has biased it, according to Martin Pei. We have access to large amounts of fossil-free electricity and also the potential to further expand the fossil-free electricity system with wind and solar. We have good conditions for replacing coal with hydrogen.

Sweden has also long had a high production of qualitative iron ore, and access to the biomass that is also needed in steel production. Martin Pei believes that these built-in advantages give Sweden good conditions.

But can really little Sweden drive this important development? The question was posed to the project's representatives when they presented HYBRIT at the UN Climate Summit in New York in September 2019. And here Martin Pei wants to give an eulogy to the Swedish state.

- In addition to the good conditions that exist for steel production in Sweden, it has meant a great deal that the state has pushed for the work for a fossil-free Sweden, he says.

Sweden is leading the way

- Steel production is a key issue globally for creating a fossil-free world. If we can show the way in Sweden and find a new way to produce steel, it can spread to the whole world, says Martin.

Sedan HYBRIT was initiated, more and more countries have become interested in creating fossil-free steel, but Sweden is still at the forefront.

- If we succeed first, it is a huge gain for both the environment and for Swedish industry. We protect the environment, but we also want to build our future business. If we can build up the new future sustainable way of producing steel, become a world leader and position Sweden, it will secure the Swedish base industry for many decades to come.

In order to succeed with HYBRIT, Martin points to the importance of support in the pilot phase, where the new technology is now being tested in a real environment. He also believes that it is crucial to invest in education and skills - from primary school to research.

- To bring about a change in a millennial industry, knowledge is needed throughout society. Since we started HYBRIT, we have noticed that the interest from young people has increased significantly.

The new durable steel is likely to be more expensive initially. At the same time, SSAB expects the carbon dioxide emission tax to increase, which will make the HYBRIT steel competitive. According to Martin Pei, the right incentive and legislation play a significant role in driving development in the right direction.

The automotive industry is of great importance to the Swedish economy. At the same time, the transport sector account...